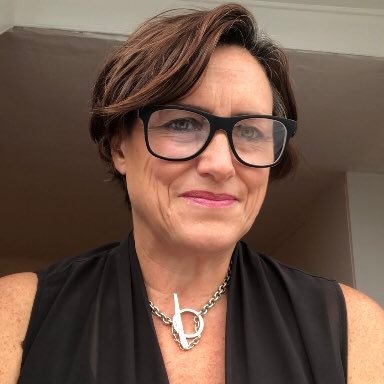 Sue Baker is Implemental’s Lead Associate for Stigma, Discrimination and Lived Experience Leadership. Sue has over 27 years of experience working to de-stigmatise mental health across the globe and was awarded an OBE for services to mental health in 2016. We asked Sue to talk with us about her work in the field of mental health and the work she has recently done with the support of Implemental.

Sue describes the steps required to tackle stigma and discrimination surrounding mental health around the world  and the importance of contextualisation and adaptation.

“Since the impact of the COVID-19 pandemic, and the mental health legacy we are all dealing with, mental health has been far higher on people’s agendas with global leaders, health leaders and communities across the globe talking more about mental health and psychological wellbeing than ever before.

There has also been more interest in tackling mental health stigma and discrimination than before, helped by programmes that have evidenced changes in many contexts in the Global North and South, and we now have the Lancet Commission report on Ending Stigma and Discrimination in Mental Health launched last week on World Mental Health Day.

However, what I often hear from groups wanting to make a concerted effort to address stigma in their content is that, whilst having the tools, evidence base and guidelines are incredibly helpful, what people also want is support and training to build capacity to adapt and implement anti-stigma programmes in their own context.

People also want to hear from peers who have undertaken similar work from design to delivery stages and evaluation.

My recent work (via contracts that I deliver through Implemental) has been focused on sharing methodologies for adaption to different contexts, providing advice and guidance on strategies, and then with other colleagues adapting and delivering some initial training focused on the most evidenced-based approach to tackling mental health stigma, which is via social contact (as recently highlighted by the Lancet Commission report) coupled by mass-media campaigns and targeted work with audiences like employers, the media, and schools.”

For the past year and a half, Sue has been running her own consultancy called Changing Minds Globally. Her work includes strategic consultancy and strategic planning, implementation and delivery with a focus on addressing mental health stigma and discrimination using evidence-based approaches that are adapted to each local context.

“I see evaluation as not just an end-point to assess impact but as a central part of any programme producing data and insights that should be used to continually review and evolve a programme.”

She also explains that the strategies and programmes she helps develop include a focus on lived experience empowerment and leadership which should be central to any program seeking to address stigma and discrimination – this is also a key recommendation of the recently launched Lancet Commission on Ending Stigma and Discrimination in Mental Health. 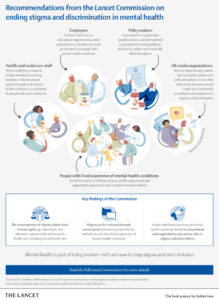 Infographic from the Lancet Commission on Ending Stigma and Discrimination in Mental Health.

Sue has been working in the Caribbean, Bermuda, Kenya, Ghana, and across Europe including supporting the establishment of a national anti-stigma and mental health literacy programme in Ukraine before the war, that is still very active, and in the last year working to support the Ministry of Health in Lithuania to develop a strategic approach to set up a programme with similar aims in Lithuania. Most recently, Sue has been working alongside the World Health Organisation in Europe to support the development of a leadership package, with a distinct focus on addressing stigma, as part of the Pan-European Mental Health Coalition set up in 2021. 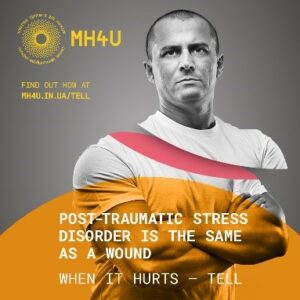 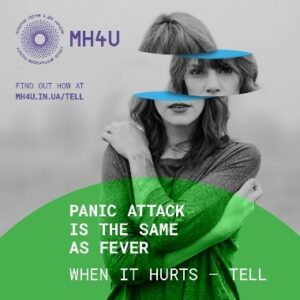 Images from the ‘If it hurts – tell’ Campaign in Ukraine. 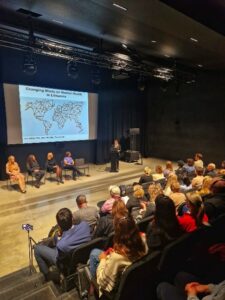 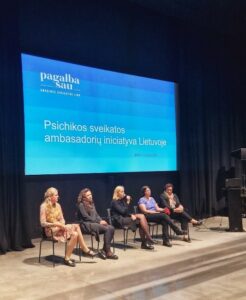 Photos from a Campaign Information Session in Vilnius, Lithuania September 2022.

Until the spring of 2021, Sue spent 25 years working around the globe on stigma and discrimination with most of this time spend working at leading UK mental health NGO Mind.

Sue started at Mind in 1995 as their first ever Head of Media Relations:

“When all the media coverage was absolutely horrific. There were all kinds of terrible, terrible headlines and coverage with all the dialogue about mental health focused on violence and danger putting the public at risk from ‘Care in the Community’. I will never forget one well-known commentator saying across the national media that this policy was “a social experiment gone horribly wrong” and that the Government (of the time) had “blood on its hands”. The national narrative about mental health, and the political one, was very negative and damaging and it left a legacy of even greater stigma and discrimination – matched by a complete absence of any education around mental health issues in workplaces, schools, colleagues or communities – so there was nothing to counter it.”

Sue was passionate about tackling stigma from her teenage years, describing it as:

“One of the grave social injustices of our time. If something happens to our minds and our psychological wellbeing, we are discriminated against in a way that doesn’t happen with other parts of our health and I was aware of this from a very young age.”

Sue explains that her personal experiences helped shape her approach to working on the Time to Change campaign.

“Stigma is something I have experienced from very close friends,  partners and family members, and I have had three breakdowns myself.”

“When I applied for the role of Director of Time To Change in 2007 I made a decision to be open about my lived experience during the job interview. I thought, you know, if I can’t mention this at an interview to run England’s biggest ever campaign to end stigma and discrimination, then:

A. this organization should not be running the campaign
B. I can’t expect other people to open up”

“So I thought, I’ve got to show leadership on this, and I have to take a risk myself, and I might not get the job. But if I don’t get the job, I can’t ask other people to open up, if I’m not willing to do it myself at the most important job, interview of my life. So I did, and I got the job.”

Sue set up the systems and the structures for the campaign which was funded in the first four years £16 million from the Big Lottery Fund (now called the National Lottery Community Fund), and £4 million from Comic Relief, which was their biggest ever grant in the UK. 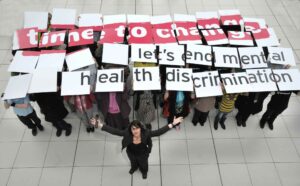 Campaign Image From The ‘Time To Change Campaign’ in England.

She explains that the work which had been done in New Zealand and then Scotland to help shift attitudes towards mental health had a positive influence on the funding for the campaign for Time to Change England. This encouraged her to become an active global citizen. She ensured that all the learning, work, tools, methodologies, and evaluations used in the Time to Change campaign, were shared widely to tackle the global issues of stigma. 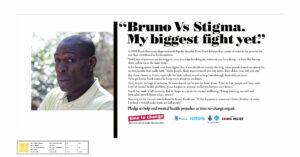 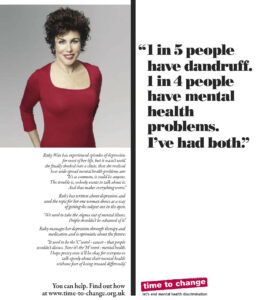 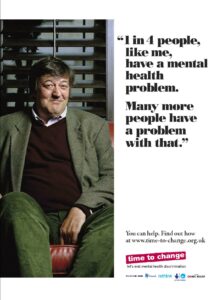 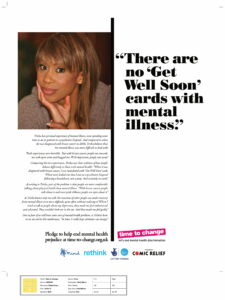 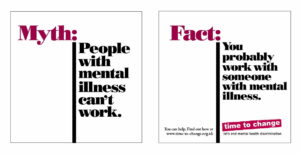 Posters from the ‘Time To Change’ Campaign in England.

The importance of being an active global citizen also encouraged Sue to co-found the Global Anti-Stigma Alliance in 2012 with with Mike Pietrus, the Director of the Canadian anti-stigma programme called ‘Opening Minds’.

She explains that the World Psychiatric Association had a stigma division with lots of researchers, evaluators and some practitioners who shared their research and evaluations. But that the people that designed and delivered the evaluations as part of the national anti-stigma programme were not working together as peers to share learning, data and resources.

The group, run on a voluntary basis with no funding, has brought people leading national anti-stigma programmes together for the last ten years and is now planning how to become a funded body that is more globally-inclusive

Sue tells us that after being approached by the UK Government in 2018, she applied and was awarded funds to see if the methodologies of Time To Change could be adapted for use in low- and middle-income countries that were members of the Commonwealth. These funds were then matched by Comic Relief and the program went on to work with CBM, an international disability inclusion NGO and five mental health NGO partners in East and West Africa and Southern India.

As an outcome of the project 111 people with lived experience of mental health problems were trained to be mental health champions in Ghana, India, Kenya, Nigeria and Uganda and the evaluation of two of the social marketing campaigns in Kenya and Ghana led to a report published in a peer review journal.

“As part of plans to ensure this short programme had a legacy, one of the plans was to share the methods, materials and learning of the five NGO partners and champions by producing a Global Anti Stigma Toolkit and that’s a big part of the legacy of the work from the global program,  Time to Change program and all partners and Champions – many of whom have continued to tackle stigma and discrimination at national, regional and global levels.”

To register to our newsletter

Leave your email and receive news and useful wellbeing tips!

This website uses cookies to improve your experience while you navigate through the website. Out of these cookies, the cookies that are categorized as necessary are stored on your browser as they are essential for the working of basic functionalities of the website. We also use third-party cookies that help us analyze and understand how you use this website. These cookies will be stored in your browser only with your consent. You also have the option to opt-out of these cookies. But opting out of some of these cookies may have an effect on your browsing experience.
Necessary Always Enabled
Necessary cookies are absolutely essential for the website to function properly. This category only includes cookies that ensures basic functionalities and security features of the website. These cookies do not store any personal information.
Non-necessary
Any cookies that may not be particularly necessary for the website to function and is used specifically to collect user personal data via analytics, ads, other embedded contents are termed as non-necessary cookies. It is mandatory to procure user consent prior to running these cookies on your website.
SAVE & ACCEPT